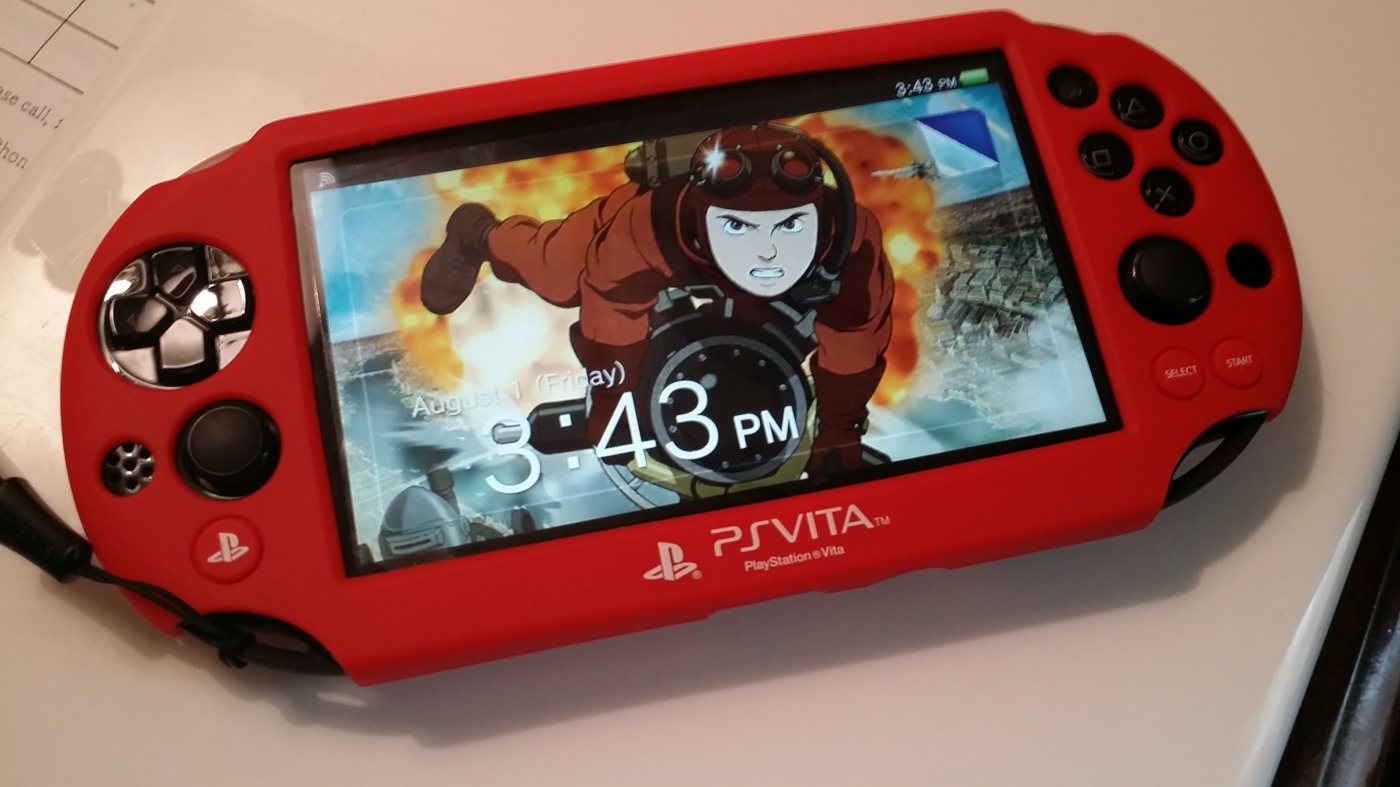 I’ve had the updated PlayStation Vita 2000 (aka Slim) model for a few weeks now. It’s pictured above with a red silicone PDP skin, which I purchased for cheap on Amazon.

There are obvious touches that are not only different but more useful. The device is not only slimmer, but the construction has been updated. It feels more comfortable to hold. The rear touchpad is a little narrower and the the small concave “grips” positioning has been tweaked. This might seem small but makes a noticeable difference for comfort. Overall the device feels much better to game with.

The buttons for Start, Select, and Power  have been modified, now round instead of oval (in the case of Start and Select) as well as being slightly raised.  This is particularly noticeable with the Power button, which previously sat flush with the top of the Vita.

The proprietary port for charging and connecting to a PlayStation or PC has been replaced with a standard micro-USB port. This is a laudable design choice, and considering the Vita’s predecessor (the venerable PSP) had a standard mini-USB port from the start, one that is long overdue.

Unfortunately, Sony is still using their overpriced, proprietary memory cards, which is a shame. This redesign could have been the opportunity for them to also switch to microSD cards. I don’t buy the argument that Sony is doing this for anti-piracy. Nintendo’s 3DS (which is killing the Vita in terms of sales) uses a standard SD card, and has not suffered as a result. This is once again the hubris that contributes to holding back Sony from truly competing in the handheld space.

The most controversial change, though, has been switching from an OLED screen to an LCD one. A lot has been made of the change and the arguments always turn to how the colors “pop” more on an OLED screen but also uses more battery. My take on the issue after having used both extensively?

Battery life is also improved. In my extensive scientific testing (i.e. just gaming), I’ve noticed the Vita 2000 nets a couple of extra hours of play time at least, and it clearly depends on what types of games you’re playing.

In the end, the Vita 2000 is a worthy investment if you’re looking for a new Vita. It’s not quite perfect; aside from the overpriced memory cards, the system has a built-in 1GB of memory that is inexplicably disabled if using an external card (why can’t you give us both, Sony?).  Sony hasn’t deemed the US worthy of receiving any color other than black, whereas Japan has a great selection of colors (among them white, red, blue, and more). And the LiveArea UI Sony uses for the Vita, while simple, still looks and feels too “cutesy” compared to the old PSP / PS3 “crossbar” and newer PS4 interfaces.

But if you already have an original Vita that is working just fine, is it worth an upgrade? No. Unless you can recoup most of your cost from selling the original, you’re not going to gain enough from just “upgrading to upgrade”. Had Sony replaced the proprietary memory card slot with a standard microSD, then the answer would have been a firm “Yes”.  Otherwise, wait until you either find a Vita 2000 for an amazing deal or your old one breaks. But if the latter occurs, replace it with a Vita 2000 if at all possible. This is what the Vita should have been out of the gate, even if Sony is still hemming and hawing on common sense.