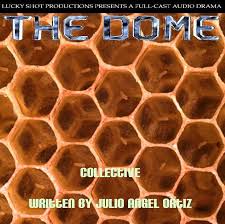 This is the first in a series of posts I’ve decided to make about stories I have sold or have been produced; mostly notes and trivia on my catalog.

Collective, my entry in the original sci-fi audio drama series The Dome, holds a very special place in my heart. It was the first writing sale I ever made! Bless John S. Drew for taking a chance on my script and taking from pitch to full-on production.