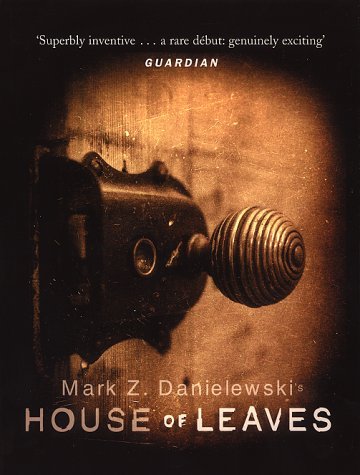 If I had to pick my favorite novel ever right now, it would have to be the amazing House of Leaves by Mark Z. Danielewski.

(And yes, before someone points it out, I have the older cover inserted into this post. Because, as awesome as the newer edition is [and yes, I own it], the cover lacks the provocativeness of the original)

I read this novel a few years ago and it still resonates strongly with me. It’s the best horror novel I have ever read, because the “horror” is rarely something you ever overtly see, never becoming anything tangible outside of the House itself.  And even then, the House’s motives are never truly clear or always malevolent.  It’s one of the few books you can go back and find something new, because Daniewlski has created a work that is symbolism richly intertwined with meta-textual narrative.  House of Leaves is easily one of the densest, multi-layered works available (hint: the title itself is a metaphor for what you’re holding in your hands).

Danielewski’s novel is unique, and dare I say “challenging”, on several fronts. The most obvious being the two ongoing narratives; the more straightforward tale of a photojournalist named Will Navidson and his attempts to document the oddities that have begun to appear in his family’s Virginia home: doors inexplicably appearing where previously there was a blank wall; hallways that extend further than the length of the house and often shift into maze-like geometries; and even more massive rooms and staircases that lead into impossible spaces, all featureless and gray.

The second narrative concerns a tattoo parlor employee, Johnny Truant, who discovers the aforementioned documentation (referred to as The Navidson Record) which was previously in the possession of an elderly man and contains a large number of footnotes and side notes. However, no record can be found that these events ever occurred, and this becomes an obsession and ultimately deterioration of Truant’s life and sanity.

This is a book that would be a huge challenge to make available into an eBook. House of Leaves has Danielewski using the very format of paper and typography to their fullest. Various characters have a specific font assigned to them, making it easier to track the current POV. The text itself becomes a morphing entity, as if a manifestation of the very House Navidson finds himself exploring and, subsequently, at odds with. You will wind up turning the book sideways and upside-down as you read on, but the neat trick is how Danielewski ties this in with the events of the story. The use of color for specific words is ingenious as well.

And Morse code. Morse code, for God’s sake. You know a book is truly epic if it includes Morse code.

One of the things I often see written about House of Leaves is how it’s a ghost story. I tend to refute this thought, given some of the information within the text. If you haven’t read the book, spoilers follow…

In the scenes where Navidson and his cohorts are analyzing the samples taken from the gray, expanded interiors of the House,  the results reveal them to be millions of years old. If you take this into account with the transcendental nature of the House’s interiors (that they are larger on the inside than outside), and how they seemingly shift in response to people’s mental and / or emotional states, I had developed this pet theory that the House is actually an ancient alien entity, something primordial that roots and configures itself to someone’s subconsciousness. This was never more apparent than near the ending of the Navidson Record, when Karen is able to “save” Will through her desire to have him back after he had been lost inside the House. Yes, it sounds hokey and contrite given that quick one-sentence overview, but within context, it works beautifully, and unlocks another layer to the story that you don’t realize was there until you hit this pivotal scene (which in itself is a beautiful moment in the novel).

8 thoughts on “House of Leaves”